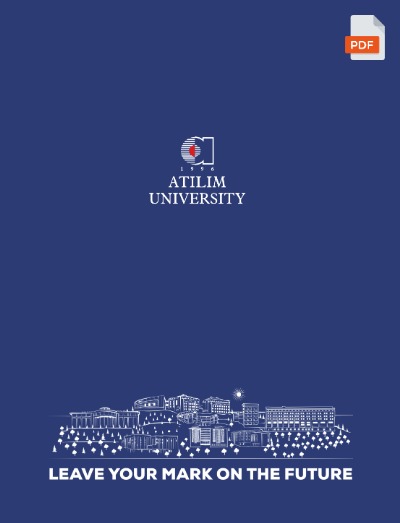 Founded in Ankara with the purpose of being a university which “provides quality education, produces science and technology, conducts research and enlightens the future of our country”, Atilim University takes firm steps to attain its target and even carry it one step further.

Founded by the Atilim Foundation on 15 July 1997 to serve as a Foundation University in the capacity of a legal entity pursuant to provisions of Law no. 2547 concerning the Foundation of Higher Education Institutes, Atilim University ranked;

Ranking among the top 6 universities in “Entrepreneur and Innovative Universities Ranking” prepared by the Ministry of Science, Industry and Technology and becoming one of the rising values of our country with its research and industrial collaboration attempts, Atilim University supports the studies of academicians on the path of “becoming a world class university” within the scope of:

Organized to create an undergraduate research culture and raise researcher and creative students at our university, Undergraduate Research Projects (LAP) are one of the most important programs of Atilim University thanks to their contribution to the training of entrepreneur researchers and fulfilling their potential. Atilim University encourages scientific production efforts as a group and individually by means of scholarships up to 1000 TL per student and 15.000 TL in total.  Projects are carried out within the scope of three sub-categories including “fundamental research, experimental development, innovative product or process”.

The projects starting as a research project which is recognized and supported by the industry and having inter-disciplinary cooperation and further research potential are preferable. In addition to “Industry Supported Projects”, the projects of TUBITAK ARDEB, TEYDEB, BIDEB, European Union ERASMUS+, Horizon2020 and Public Institutions are regarded as other externally supported projects. Undergraduate Research Projects, which have been conducted since 2010, are shared with our stakeholders in and out of university through exhibitions and presentations at the end of each academic year.

In addition, graduate schools of Natural and Applied Sciences and Social Sciences offer graduate education at Atilim University which launched collaborative research projects with defense industry organizations within the scope of Researcher Training Program for the Defense Industry (SAYP) developed by Undersecretariat for Defense Industries.

Besides the studies conducted in 14 Research Centers, 150 laboratories of Atilim University are utilized by students for research and training purposes. One of the research centers of Atilim University, Metal Forming Center of Excellence has the characteristics of being one of the tree most developed centers of Europe and the first and only research center in Turkey. The Metal Forming Center of Excellence (MFCE) was established in 2010 and funded by the Turkish Ministry of Development and Atilim University. The Center aims to support the Turkish metal forming industry through research in four main areas, develop innovative, knowledge-based manufacturing technologies, manufacture high value-added components, manufacture new and advanced materials and explore options for energy-efficient manufacturing.

Similarly, the Civil Aviation Training Center of Atilim University located in Esenboga Airport is the first and only aircraft hangar launched by a university in Ankara.

Celebrating 20th anniversary of its foundation with “Entrepreneurship, Progress, Change” motto, Atilim University became entitled to be supported as implementing organization in TUBITAK BIGG (Individual Young Entrepreneurship) Program which will collect and evaluate business idea applications of entrepreneurs, pre-incubate the approved ideas and subject them to business idea confirmation processes and support entrepreneurs in terms of qualified business plan preparation.

In addition to programs delivered in Turkish, Atilim University offers majority of higher education programs in English and students even have the opportunity to learn different languages. More than 500 international students from 50 countries receive education at Atilim University which reaches every corner of the world.

Atilim University strives to raise individuals who beautifies the life in terms of many perspectives such as science, culture, arts and sports. Therefore, Atilim University aims to announce, share and multiply the values of students to all stakeholders with “50 Outstanding Students of Atilim”, “Progress towards Life” and “Sharing the Success” programs.